skip to main | skip to sidebar

[The] corporation ... continues to conduct business even though the state of California suspended its registration over two months ago. Operating without a valid registration is illegal under California law, legal experts said. ...

Jonas Grant, an L.A.-based attorney who practices corporate entities law, said as a business without a valid corporation registration, “you’re basically dead in the water until you fix the problem.” ...

Suspension temporarily strips corporations of a number of rights ... including being able to defend itself in court or bring a lawsuit. Such corporations could also have contracts voided by a court, according to California law.

Inside Mercer Vine: A suspended brokerage, a potential fraudster at the helm, and $260M in dead deals by Natalie Hoberman and Will Parker, The Real Deal, December 1, 2017.

A suspended corporation cannot conduct any business in the State of California until it is revived to active, good standing, a process called revivor. This is generally accomplished by filing any past due annual reports or tax returns, and by paying any past due taxes, interest, and penalties with the Franchise Tax Board.

Recommended steps to avoid a suspension include engaging an accountant to assist with tax preparation and filing and to keep track of associated deadlines, and enrolling the LLC or corporation in a lawyer's corporate maintenance program to ensure legal compliance.

Does LegalZoom Handle Its Own Trademark Registrations?

LegalZoom offers trademark filing services, so naturally, when it comes to its own trademarks used to promote this and other of its online, non-attorney document preparation services, it trusts these to its in-house team, the same ones used by its customers, right? 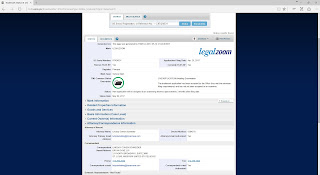 You may want to consider following Legalzoom's lead and engage a trademark attorney to register, maintain, and advise your small business regarding trademark matters.

Why Do TV Networks Have 'No Unsoliciated Materials' Policies?
One reason:

LAWSUITS. Networks do not want to get sued because you thought they stole your idea. When creators pitch an undeveloped idea anybody could have come up with ... they think a show that has anything do with their idea was stolen from them. For instance, Marc Zicree was a writer on “Star Trek Next Generation” and he told us there were one, or more, lawsuits filed for every episode by people who claimed their ideas had been ripped off. Are ideas ever stolen? Yes. Does it happen as often as rumored? Absolutely not.